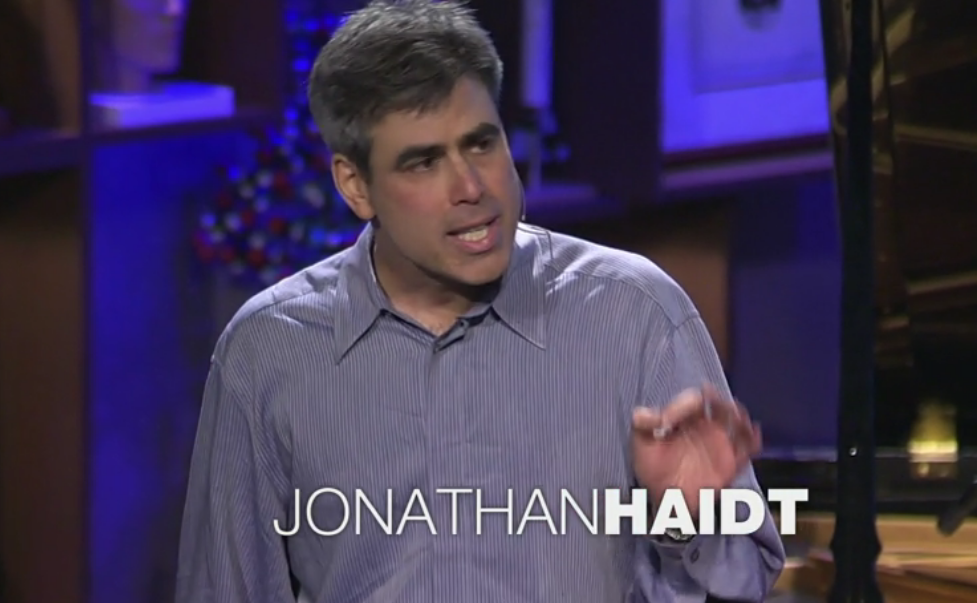 Psychologist Jonathan Haidt studies the five moral values that form the basis of our political choices, whether we’re left, right or center. In this eye-opening talk, he pinpoints the moral values that liberals and conservatives tend to honor most and the goal of moral humility to step outside our own values.

Note: The sixth foundation, Liberty was theorized by Haidt in The Righteous Mind chapter 8, in response to the need to differentiate between proportionality fairness and the objections he had received from conservatives and libertarians to coercion by a dominating power or person. Haidt noted that the latter group’s moral matrix relies almost entirely on the Liberty foundation.

A game in which you give people money, and then, on each round of the game, they can put money into a common pot, and then the experimenter doubles what’s in there, and then it’s all divided among the players. So it’s a really nice analog for all sorts of environmental issues, where we’re asking people to make a sacrifice and they themselves don’t really benefit from their own sacrifice. But you really want everybody else to sacrifice, but everybody has a temptation to a free ride. And what happens is that, at first, people start off reasonably cooperative – and this is all played anonymously. On the first round, people give about half of the money that they can. But they quickly see, “You know what, other people aren’t doing so much though. I don’t want to be a sucker. I’m not going to cooperate.” And so cooperation quickly decays from reasonably good, down to close to zero.

But then – and here’s the trick – Fehr and Gachter said, on the seventh round, they told people, “You know what? New rule. If you want to give some of your own money to punish people who aren’t contributing, you can do that.” And as soon as people heard about the punishment issue going on, cooperation shoots up. It shoots up and it keeps going up. There’s a lot of research showing that to solve cooperative problems, it really helps. It’s not enough to just appeal to people’s good motives. It really helps to have some sort of punishment. Even if it’s just shame or embarrassment or gossip, you need some sort of punishment to bring people, when they’re in large groups, to cooperate. There’s even some recent research suggesting that religion – priming God, making people think about God – often, in some situations, leads to more cooperative, more pro-social behavior.

Traditional authority, traditional morality can be quite repressive, and restrictive to those at the bottom, to women, to people that don’t fit in. So liberals speak for the weak and oppressed. They want change and justice, even at the risk of chaos. This guy’s shirt says, “Stop bitching, start a revolution.” If you’re high in openness to experience, revolution is good, it’s change, it’s fun. Conservatives, on the other hand, speak for institutions and traditions. They want order, even at some cost to those at the bottom. The great conservative insight is that order is really hard to achieve. It’s really precious, and it’s really easy to lose.

From the Zen master Seng-ts’an: “If you want the truth to stand clear before you, never be for or against. The struggle between for and against is the mind’s worst disease.”

Well, if you take the greatest insights from ancient Asian philosophies and religions, and you combine them with the latest research on moral psychology, I think you come to these conclusions: that our righteous minds were designed by evolution to unite us into teams, to divide us against other teams and then to blind us to the truth. So… Step out of the moral matrix, just try to see it as a struggle playing out, in which everybody does think they’re right, and everybody, at least, has some reasons – even if you disagree with them – everybody has some reasons for what they’re doing. Step out. And if you do that, that’s the essential move to cultivate moral humility, to get yourself out of this self-righteousness, which is the normal human condition.